On July 29, 2019 our good friend and fellow modeler, Robert P. "Bob" Spagnola departed from this world.  Bob was a founding member of our AMPS chapter, an AMPS National Member, an AMPS Certified Field Judge, and a prolific model builder who was always improving.  Bob struggled with pain and health issues, but he had been doing better in the last year. He judged during a number of shifts during our MEGA-Show last month, and also was awarded 3 Bronze and 1 Silver Medals for his entries. Above all else, Bob was our friend, more well known to some, but who will always be remembered for his positive attitude.

More than words can say, Bob will be missed greatly by all of the Wildcats. 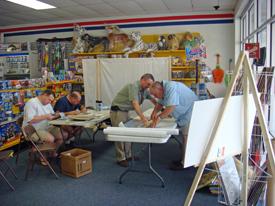 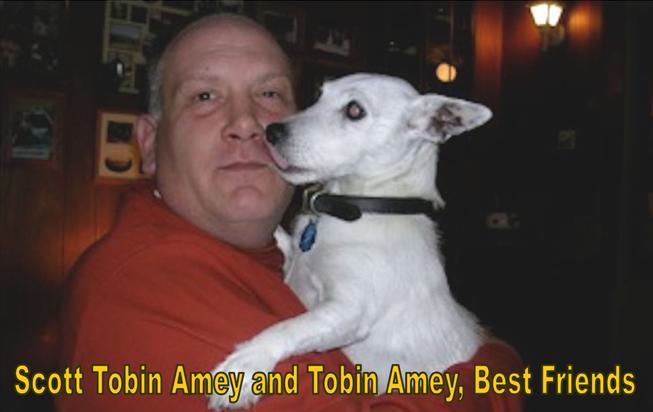 In 2014 we had to say goodbye to our good friend and fellow modeler, Scott Tobin Amey.  Scott was a founding member of our AMPS chapter, our club treasurer, and a damn fine model builder. Above all else, Scott was our friend.  He was a soft-spoken man whose wit and sense of humor were not immediately apparent when you first met him.  For those who were fortunate enough to know Scott, his friendship was rewarding.  He was a loyal and enthusiastic supporter of our club, and a regular “work horse” who could always be counted on to help out with our events.  His volunteering to be our treasurer was just one example of his enthusiastic support. Scott brought his latest and apparently last build to the August 12 meeting; a Hobby Boss 1/35 scale "German Pz.Kpfw.I Ausf.F (VK18.01) – Early", which he had added Spade Ace Metal Tracks. The below slideshow is a sampling of some of Scott's fine work.

We miss him more than words can say.

With this in mind, we decided to honor Scott's memory by creating a "Scott Amey Best Intermediate Model" Award exclusive to our AMPS Chapter, which we first awarded during our 2015 Show. 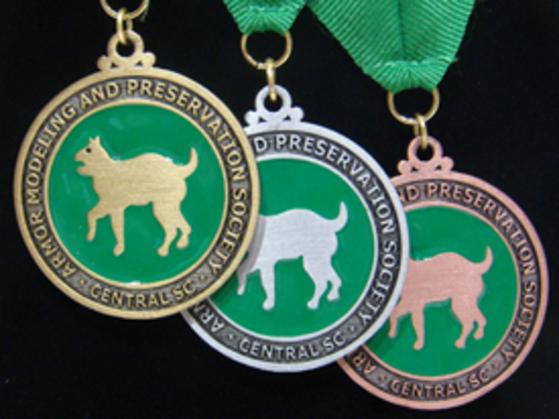 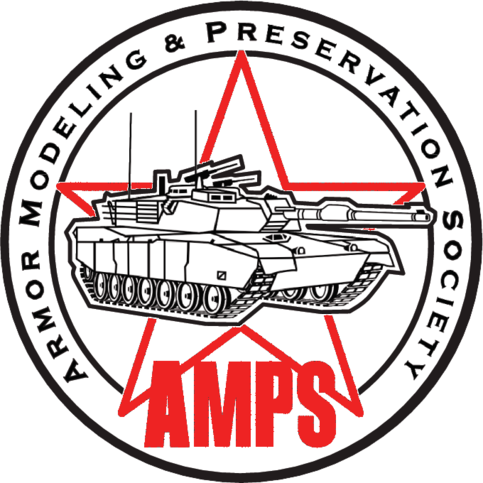 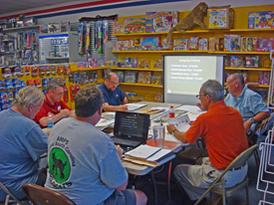 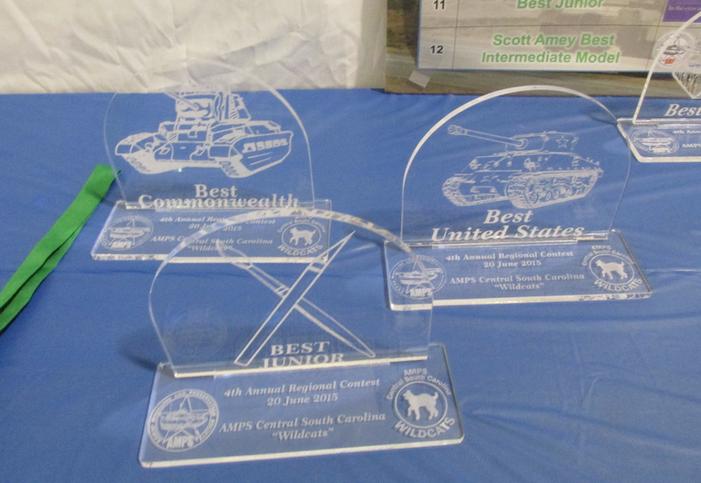 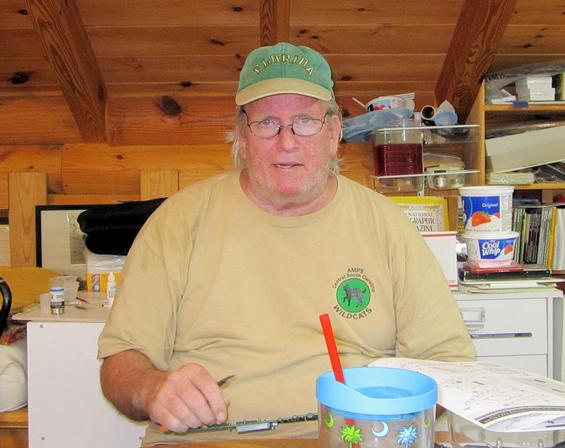 The Armor Modeling and Preservation Society, Inc., or AMPS, was founded in July 1993. Since that time, AMPS has grown and now has hundreds of members worldwide. Although AMPS's main function is as a modeling club, it is definitely a different type of modeling organization when compared to IPMS or other mainstream groups. AMPS has a Constitution and Bylaws to govern how it is run, and the AMPS judging system rewards individual effort using a point system to minimize subjectivity and encourage model builders to continuously improve their craft.

The purpose of AMPS is to foster a knowledge and appreciation of the history of armored vehicles through the examination of preserved examples located in both museums and private collections and in miniature through the medium of modeling. The AMPS national organization publishes a 28-page journal called Boresight six times a year. This journal covers reviews, tips, articles on preserved vehicles, and comparisons of models and related items.

Click this link for information about the Boresight magazine including a complementary sample issue!

AMPS hosts an International Convention every spring in which the subject of armor is supreme. The convention features the best armor model vendors, seminars from armor experts, and an excellent example of the best armor models from around the world in its competition. Competition is organized into five levels - junior, basic, intermediate, advanced, and master - and the judging system rewards the modeler for his individual effort.  Models are judged against a set of standard criterion and not in comparison to other works exhibited.  In the end, each modeler is provided scored and written feedback about each model he or she exhibits with suggestions for improvement.  The over all objective to foster improved craftsmanship and skill in all of the exhibitors, and this approach has proved its worth!  Every year the quality of the models entered just gets better and better!

As an example of the AMPS International Convention, the 2016 show was held right here in Sumter, SC on 7-9 April, 2016.  That year there were over 400 world-class armor models exhibited and more than 100 vendor tables full of armor goodies:

Click this link to view a Photo Album from the AMPS 2016 International Show, Sumter, SC!

Check out the AMPS link above for information about the 2017 International Convention scheduled for April in Danbury, CT!

Since its establishment in 1993, AMPS has grown into a "grassroots" organization, boasting more than 48 local chapters in the United States and around the world.  Our chapter, AMPS Central SC"Wildcats," is one of the newest of these local groups.

We organized in August, 2010, with 10 members.  Since then, our membership has grown to include about 28 regular members who live throughout the Midlands and Piedmont Regions of SC.  Membership in the national organization, while encouraged, is not required for membership in a local chapter.  Members of AMPS Central SC are issued membership cards which, when presented at participating local hobby shops, get our members shopping discounts of up to 10%. 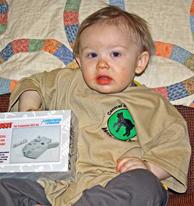 In order to recognize the skill and achievements of our model show participants, AMPS Central SC "Wildcats" have commissioned our own specially designed Gold, Silver, and Bronze Medals!

These unique AMPS medals were awarded for the first time at our July 14, 2012 contest.  The medals feature the AMPS Central SC "Wildcat" design on a green background with the inscription "Armor Modeling and Preservation Society - Central SC" surrounding the wildcat.

For our 2015 "Go Trackless" Show, we awarded our club's Special Awards for the first time. The Acrylic Plaques with etched images and text are unique and specialized for each award subject. 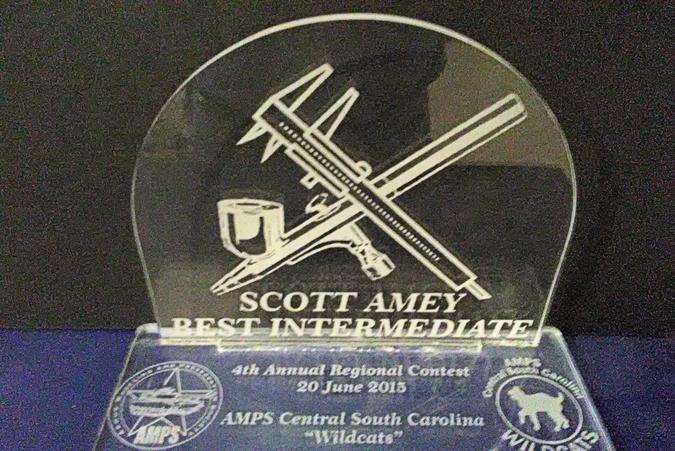 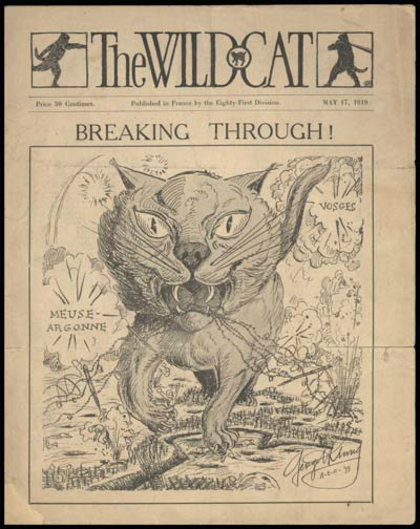 Our regular monthly meetings often include demonstrations and how-to discussions and always include members showing off their latest completed builds and works-in-progress.  Member skill levels run the full spectrum from basic new builders to accomplished advanced modelers, but no matter anyone's skill level, everyone is willing to share their knowledge and craft.  We're always learning from each other, getting better with each new project.  So, no excuses!  All skill levels are welcome!

Our Mascot and Logo – The Wildcat

We took our club logo and the name for our newsletter from the US 81st Division insignia.  The 81st was a National Army (i.e. formed from draftees) division established in WW I at Camp Jackson, SC.  While undergoing their train-up in preparation for movement to the battlefields of war torn France, the 81st Division "Dough Boys" were billeted in a cantonment area near Wildcat creek.  One of the division's members, Corporal Dan Silverman, Company I, 321st Infantry Regiment, designed the black Wildcat as a distinctive shoulder sleeve insignia.  When the 81st Division arrived in France and joined the American Expeditionary Force, the AEF, the division's unique insignia proved very popular and many of the other AEF units there began wearing their own designs.  This "unofficial" practice was eventually approved by Gen. Pershing, and thus was born an American uniform tradition that's still followed today.

And by the way, that 81st Division "Wildcat" is still worn today by the 81st Regional Support Command, the largest US Army Reserve command, which encompasses 8 states (including SC) and provides command and control of over 100,000 reserve soldiers.  The 81st RSC is headquartered at … Fort Jackson, SC, of course!  So, the legend and history of the "Wildcat" lives on right where it was born.  ​